The EDGE Navigator screens are small windows on your drawing and back ground image screens. They allow you to Zoom in (or out) as needed to take a quick peek at a specific area of an image with having to Zoom in or out on you major viewing or drawing screen. Some estimators use the Navigator to move them to different areas of the drawing screen. As you move in or out you will see the large screen replicate the Zoomed area.

Below are examples of the Navigator screens found on the Drawing screen and the Background Image Manager.

The Navigation on the left is from the Background Image Manager and the one on the right is from the Drawing screen. In the examples above at the bottom of the Navigator is a slide bar this slide bar is similar in function and operation to the Zoom function of the drawing screen. As you move the bar to the right the more to enlarge the picture, you are moving further and further in. an example is shown below. 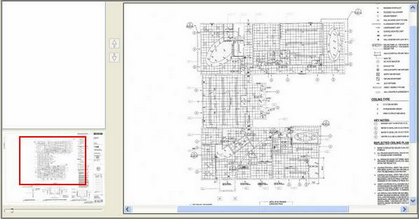 Here is the image as seen full screen, if you observe the slide bar the arrow is far to the left. The red box indicates the area being displayed in the large window to the right. 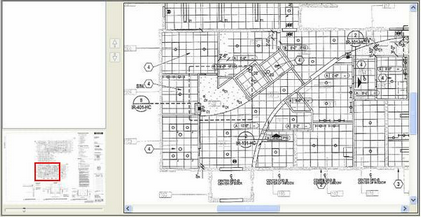 Here is the same image, notice now the slide bar has been moved to the right, the red box is smaller indicating it has “zoomed” and now the detail in the large frame on the right is clearly visible.

It does not matter what screen you are in, wherever you come across a navigator they all operate and function the same.