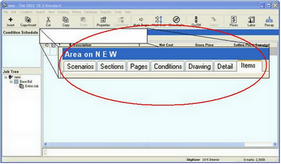 The Screen Tabs are the functions that move you in and out of The EDGE. Each tab represent a different screen, they do not represent all of The EDGE screens but they are some of the ones that you will see and use the most often.

When you start a new job, after creating and saving it, the first screen you will see will be the Page List Screen. The EDGE will auto create a Scenario and Section screen. It does not open on either of them because there is no need to at this point. Following the Six Steps you will create a page, move to the Condition List Screen import groups, setup up conditions and then open the Drawing screen to digitize your estimate

When you open The EDGE to return to an old estimate or one that you started yesterday The EDGE this time opens on the Scenario screen and you will have to work your way towards the screen you want to work in. The reason for opening on the Scenario screen is due to the fact you have already started an estimate so The EDGE does not know if you are returning to add new conditions or a new Scenario or Section so it defaults to the obvious and open where it thinks you want to be.