Like many of the screens in The EDGE the Bid Grid screen allows a user to customize the columns that are shown when you are in the screen. You can also adjust the order in which the columns appear by clicking and holding the left mouse button down and moving the column left or right to its new location. Users cannot create new columns and headers you can only use what is there.

To customize your database columns, select File | Customize Columns. Doing so will open a Customize list of headings that you have not included 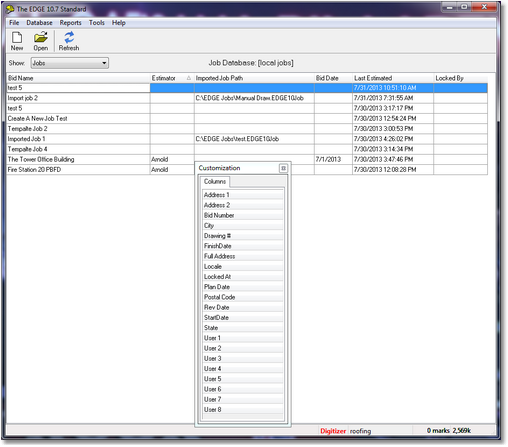 There are thirty possible columns one can display for the Bid Grid screen view. One would have to have a very large monitor in order to be able to display them all st once. The Edge has a default setting for the displayed columns. One can add or delete columns as they chose. Simply click on File | Customize Columns, to add columns click on and drag a title to the column header position. To remove a column lick on Customize Columns, then click and drag the unwanted column from the header to the drop down list.