May 21, 2018—BOYNTON BEACH, FL – David Shugars, a thought leader of Roofing Technology Think Tank (RT3), and Director of Product Management at The Estimating Edge (www.estimatingedge.com), hosted a RT3 Episode on Artificial Intelligence on May 9, 2018. RT3 is a group of thought leaders in the roofing technology industry. These thought leaders have a mission to engage in strong discussions around emerging construction and roofing technologies, in hopes of boosting industry standards and community.

During this tech talk, Shugars mentions that Artificial Intelligence, or AI, is based on three foundational concepts. One is that in order for the AI to be successful, a lot of data needs to be presented to the AI engine. Using this data, the AI will improve results over time, remove uncertainties, and constantly improve itself. Shugars emphasized that AI is imperfect, and based on probability and statistics. In order to make use of this technology, it is typically installed into a physical hub, such as a machine or robot. Shugars then went on to describe three examples taking place in the AI industry.

LOL – BOT
Shugars used a video of the LOL – BOT during his presentation. The LOL – BOT is an Artificial Intelligence comedic robot that has performed in various comedy venues. The robot has created much laughter around the audiences it which is has performed. Shugars describes in order to make use of this technology, programmers would have installed about 1,000 jokes of data loaded into the LOL-BOT. The robot would then tell a joke, and scan the audience faces afterwards, to see whether or not laughter ensued. If the response was laughter, the robot would then tell a similar joke after the initial one. If the robot detected faces of frowns or no laughter, it would learn and store this data, and move on to telling a different joke from the previous.

Roomba® Robot Vacuum
Shugars described another example of Artificial Intelligence in the tech talk, which has been made into a mainstream concept. Many people own AI in their homes already without realizing it – one example being the Roomba® Robot Vacuum. This robot vacuum will move across floors on its own, making pathways as it moves between rooms. The Roomba® has sensors around its surface, which detects if it bumps into an object. Over time, the AI technology within the bot stores this object data in its system, learning to avoid bumping into the same object over and over again.

Pointivo
Shugars gave a third example of Artificial Intelligence already taking place in the construction and roofing technology industry, within a company called Pointivo. Pointivo is a 3D intelligence technology platform that uses computers and AI to automatically generate digitized models for VR, BIM, and CAD systems. Shugars refers to one video example used on Pointivo’s website – their technology within a drone. This drone is able to fly around a building, detect objects such as trees that may get in the way of projects, and output a 3D BIM of the structure. In this real world example, the AI technology is constantly improving itself by learning to know what trees look like, avoid them during the measurement process, and thereby creating a more accurate structure measurement.

David Shugars is a RT3 member, and Director of Product Management at The Estimating Edge. Shugars has been in the software business for over 20 years, and holds a master’s degree in computer systems engineering from the University of Michigan. David Shugars can be reached at [email protected]. To watch the Artificial Intelligence video, visit YouTube.

The EDGE™ is Your Answer to Remote Estimating 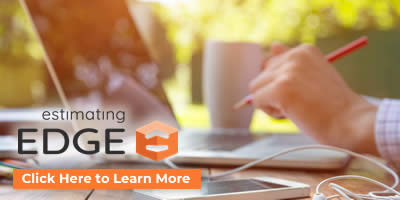